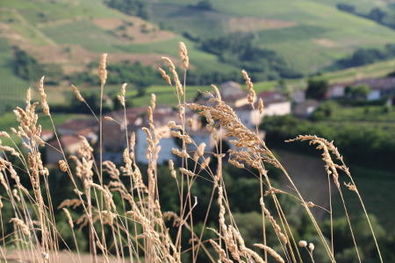 ‘Bel Avenir’, French for ‘bright future’, may have seemed like wishful thinking for its founder, an Italian immigrant who settled in Beaujolais only 3 generations ago. But now his grandson Alain Dardanelli heads a domaine that boasts parcels in the best Beaujolais Crus regions and consistently yields wines with powerful body and strong personality. We think it bodes well for the domaine’s future…

Alain discovered his passion for winemaking at age 15, and worked alongside his father until he took over the domaine in 1986. He now heads it with his wife Cécile.

Combining Alain’s winemaking flair with Cécile’s business acumen, the couple has grown the domaine to 39.5 acres, patiently acquiring parcels of Moulin-à-Vent, Morgon Charmes, Régnié, Saint-Amour and Juliénas to increase the quality and diversity of the domaine’s wine list.

Beaujolais is mostly known in the US through Beaujolais Nouveau, light and often low-quality wines that flood the supermarkets around Thanksgiving. These wines are produced through a fast-forward vinification technique that allows them to be bottled and sold only 2-to-3 months after the harvest.

‘Bel Avenir’ does not do this.

‘Bel Avenir’ produces ‘Cru Beaujolais’ wines. These wines come from the best Beaujolais terroirs — hillsides of decomposed granite located mostly in the Northernmost part of the Beaujolais region — and undergo a longer vinification process that coaxes depth and complexity from the naturally fruity Gamay grapes, and ensures greater longevity.

The Dardanellis harvest by hand and raise their wines in a cavernous concrete cellar partly buried underneath Alain’s parents’ house. Near the entrance, large cement and stainless steel vats house fermentation. Deeper in the cellar, rows of oak barrels slowly mature the fermented juices. Alain Dardanelli checks the barrels regularly, waiting until his wines have reached enough power and intensity to bottle them. The process can take several months, and once bottled, certain wines won’t reach full maturity for a few years.

Powerful, dynamic, and made to last, the Cru Beaujolais from ‘Domaine Bel Avenir’ are a bargain at $16 each. Get them while they last!